Catholic Mary Deserves a Page of Her Own

Do you think it’s a coincidence that the sign for Virgo is an M with what appears to be a Christian Fish in it? 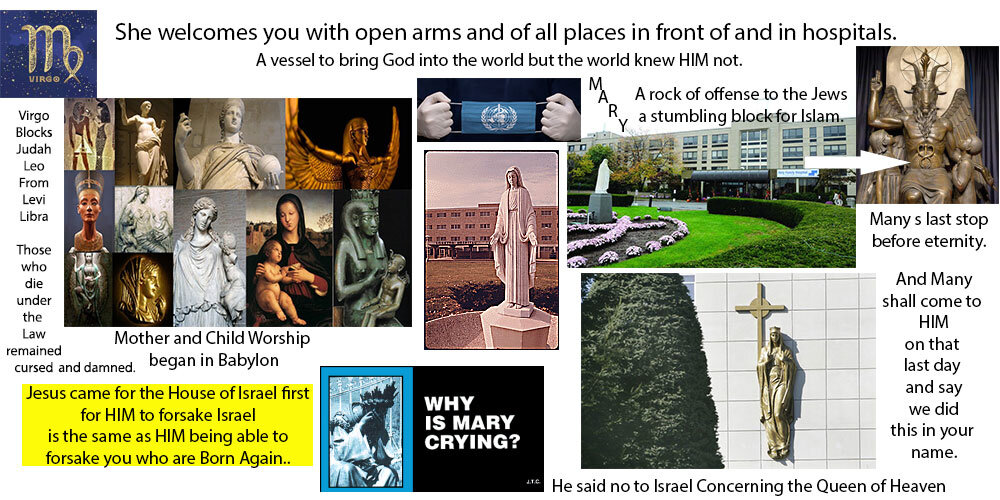 Women did not exist until God took the rib from Adam’s side to make him a helpmate. She was not made from the dust of the ground as Adam was.  God brings her to the man so we can only conclude she was fashioned in heaven a cleanroom environment because she would carry us all to earth.

The womb is a holy place to bring life to earth.

Especially the designer and creator of heaven and earth.

Where were you before you got here?  God assigns the spirit to the flesh? He made you a man or a woman knowing where you would find the most joy in your walk with HIM.

How many doubting angels asked to see the SON rather than believe and have faith?

The answer is how many Jewish people are there in comparison to the rest of us today?

The Jewish people represent the angels who remained in the heavens and trusted in God.

Because everyone that is here today has had a part to play in it.

Is it only in heaven that God can wipe away our tears and remove the memories of our bad past?

Mary may be Crying because Jesus is not everyone’s number one God,  and because so many use her SON’s name in vain,  but it also could be she found out she has to wear that same blue outfit again.

The following two links go to a man who made the appointed times list.  Meaning  his passing to go into heaven was calculated using month, day, century, year, and age added together gave a pointer, starting at the man who was after God’s heart towards the heart of God found in the four gospels.   The passage it points to declares Jack Chick was a wise man who won souls. I support his work and Satan does not.

On the witnesses of two or more let the thing be established!

See Why Mary is Crying and God is angry that HIS SON is not their Number One!

May I remind you Rome is where all the pantheon of gods gathered together to hinder the work of Christ and even prepared HIM a cross and that for me is a BIG thank you but it ends there, and so should they have?

Permanent link to this article: https://thedivineplan.org/catholic-mary-deserves-a-page-of-her-own/