Billy Graham was a wise man who spoke righteousness and sought to shine a light on the soul in darkness. He was a Baptist Evangelist. 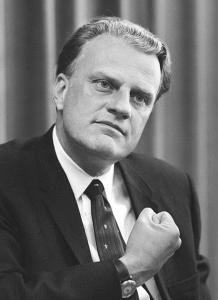 We get to Proverbs 10 by adding it to the 150 Psalms of David who was a man after God’s own heart. We start there and work our way to the heart of the Bible the four Gospel’s God’s heart.

Proverbs 10:1-32 KJV
(1) The proverbs of Solomon. A wise son maketh a glad father: but a foolish son is the heaviness of his mother.
(2) Treasures of wickedness profit nothing: but righteousness delivereth from death.
(3) The LORD will not suffer the soul of the righteous to famish: but he casteth away the substance of the wicked.
(4) He becometh poor that dealeth with a slack hand: but the hand of the diligent maketh rich.
(5) He that gathereth in summer is a wise son: but he that sleepeth in harvest is a son that causeth shame.
(6) Blessings are upon the head of the just: but violence covereth the mouth of the wicked.
(7) The memory of the just is blessed: but the name of the wicked shall rot.
(8) The wise in heart will receive commandments: but a prating fool shall fall.
(9) He that walketh uprightly walketh surely: but he that perverteth his ways shall be known.

We know who you are come out of her.
(10) He that winketh with the eye causeth sorrow: but a prating fool shall fall.
(11) The mouth of a righteous man is a well of life: but violence covereth the mouth of the wicked.
(12) Hatred stirreth up strifes: but love covereth all sins.
(13) In the lips of him that hath understanding wisdom is found: but a rod is for the back of him that is void of understanding.
(14) Wise men lay up knowledge: but the mouth of the foolish is near destruction.
(15) The rich man’s wealth is his strong city: the destruction of the poor is their poverty.
(16) The labour of the righteous tendeth to life: the fruit of the wicked to sin.
(17) He is in the way of life that keepeth instruction: but he that refuseth reproof erreth.
(18) He that hideth hatred with lying lips, and he that uttereth a slander, is a fool.
(19) In the multitude of words there wanteth not sin: but he that refraineth his lips is wise.
(20) The tongue of the just is as choice silver: the heart of the wicked is little worth.
(21) The lips of the righteous feed many: but fools die for want of wisdom.
(22) The blessing of the LORD, it maketh rich, and he addeth no sorrow with it.
(23) It is as sport to a fool to do mischief: but a man of understanding hath wisdom.
(24) The fear of the wicked, it shall come upon him: but the desire of the righteous shall be granted.
(25) As the whirlwind passeth, so is the wicked no more: but the righteous is an everlasting foundation.
(26) As vinegar to the teeth, and as smoke to the eyes, so is the sluggard to them that send him.
(27) The fear of the LORD prolongeth days: but the years of the wicked shall be shortened.
Billy was 99 years old.
Brian Jones was 27, Jim Morrison was 27, Jimmy Hendrix was 27, Janis Joplin was 27, and Kurt Donald Cobain was 27.
The Bible is true!
(28) The hope of the righteous shall be gladness: but the expectation of the wicked shall perish.
(29) The way of the LORD is strength to the upright: but destruction shall be to the workers of iniquity.
(30) The righteous shall never be removed: but the wicked shall not inhabit the earth.
(31) The mouth of the just bringeth forth wisdom: but the froward tongue shall be cut out.
(32) The lips of the righteous know what is acceptable: but the mouth of the wicked speaketh frowardness.
Back

Permanent link to this article: https://thedivineplan.org/divine-times/billy-graham/