This man along with people like Wilhelm Maximilian Wundt and Charles Darwin created people like Adolph Hitler with their grandiose ideas.

Their minds were not set on the things of God.

Nietzsche suffered a collapse in 1889 while living in Turin, Italy. The last decade of his life was spent in a state of mental incapacitation. The reason for his insanity is still unknown, although historians have attributed it to causes as varied as syphilis, (Freud said his syphilis was from a homosexual relationship he had.) an inherited brain disease, a tumor, and overuse of sedative drugs. After a stay in an asylum, Nietzsche was cared for by his mother in Naumburg and his sister in Weimar, Germany. He died in Weimar on August 25, 1900, at the age of 55

A mentee of Wilhelm Maximilian Wundt it should have been Jesus oops. 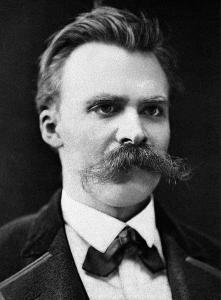 When doing Nietzsche I noticed the double 0’s and 5’s. Five is my number and I was fifty when I got the tap on the shoulder from Jesus fifty as we all know is the day of Pentecost. So there are two parts to Nietzsche he was a philosopher and a philologist in Latin and Greek.

Psalms 52:1-9
(1) Why boastest thou thyself in mischief, O mighty man? the goodness of God endureth continually.
(2) Thy tongue deviseth mischiefs; like a sharp razor, working deceitfully.
(3) Thou lovest evil more than good; and lying rather than to speak righteousness. Selah.
(4) Thou lovest all devouring words, O thou deceitful tongue.
(5) God shall likewise destroy thee for ever, he shall take thee away, and pluck thee out of thy dwelling place, and root thee out of the land of the living. Selah.
(6) The righteous also shall see, and fear, and shall laugh at him:
(7) Lo, this is the man that made not God his strength; but trusted in the abundance of his riches, and strengthened himself in his wickedness.

That was Nietzsche this is me.

(8) But I am like a green olive tree in the house of God: I trust in the mercy of God forever and ever.
(9) I will praise thee for ever, because thou hast done it: and I will wait on thy name; for it is good before thy saints.

Most quoted when and remembered for saying God is dead. How does one think God is dead? Is not the purpose of God life? You can’t kill what is eternal, just ask Nietzsche now of his theory.

You need Jesus, not a fool’s advice.

Permanent link to this article: https://thedivineplan.org/divine-times/friedrich-wilhelm-nietzsche-gods-dead-abel-though-he-be-dead-still-spoke/