What is Born Again?

George H.W. Bush Another for the Appointed Times List

Jesus cried out to HIS Father Luke 23:34 Then said Jesus, Father, forgive them; for they know not what they do. And they parted his raiment, and cast lots.

This is the only account we have of Jesus saying this, and it is found only in Luke’s gospel which was comprised on the witness of others who observed Jesus, why is such a statement not found in the other gospels?

John 19:23-24
(23)  Then the soldiers, when they had crucified Jesus, took his garments, and made four parts, to every soldier a part; and also his coat: now the coat was without seam, woven from the top throughout.
(24)  They said therefore among themselves, Let us not rend it, but cast lots for it, whose it shall be: that the scripture might be fulfilled, which saith, They parted my raiment among them, and for my vesture they did cast lots. These things therefore the soldiers did.

In Matthew, it is again the clothes that get the attention, not HIS words of such importance rather it is his covering getting the attention.

Matthew 27:33-35  And when they were come unto a place called Golgotha, that is to say, a place of a skull, (34)  They gave him vinegar to drink mingled with gall: and when he had tasted thereof, he would not drink. (35)  And they crucified him, and parted his garments, casting lots: that it might be fulfilled which was spoken by the prophet, They parted my garments among them, and upon my vesture did they cast lots.

Was it even said at all or was Luke’s witness taking liberties? I believe HE loved HIS tormentors; it was the darkness in them; HE did not care for He was dying for their souls as well. Anyone of them could have repented and surrendered to the great LOVE laid before them and be received of the Father.

In my line of work, the transportation industry we have two shifts, at the end of my shift I jump out of my vessel (truck in this case) and another jumps in to finish the day. One day I took a tractor the only available one I could find that another driver claimed was his personnel tractor when I got back to the terminal he was fuming, and he said to me good thing you are a Christian you can forgive yourself.

That driver, by the way, I brought to the LORD on his death bed he had hepatitis and knew he was dying , his liver was failing.  After saying the sinners’ prayer and asking Jesus into his heart, he began weeping and remorseful for the sins he had committed.  I knew his conversion was genuine as he thanked me and proclaimed I now have a place to go.

I had an AG reverend practically told me he was a Jesuit referred to me as a dirtbag and loves to teach how he will sit on the right hand of Jesus.  His excuse in heaven will be I call everyone dirtbag you should have chosen someone with tougher skin and a less tender heart.   I tried to explain no one sits on HIS right hand only HIS Father you may stand at his right hand in the judgment or in his hand if you repent because I think dirtbag like Raca or fool falls into the danger of the council.

We are to forgive those who do us wrong greater than that we are tasked to reconcile if we have harmed anyone we are asked to make it right before we offer whatever gift we seek to bring to God.

Somewhere in our doctrines, we have forgotten this part how has it become, being a Christian never means having to say you’re sorry?

I had great anger towards a pastor he was using his human psychology to provoke it, playing the devils advocate like he was Satan’s second in command I asked and told the congregation of my anger and asked him to forgive me and of course for display purposes he did. Oddly he never asked what it was that made me angry?  Which has again made me mad?

Yes, this is the way to bring about revival and express the same joy God has for me in finding the effigy of HIS SON lying in Egypt you can see by my website how much God hates me and thus so should his servants?

I should not have asked Father to give me what I needed to bring in HIS harvest when HE asked what would you have of me?  I should have gone for the Pony.

I was pretty sure the Antichrist was Obama a groomed to appear as if he was a false messiah for the Muslims and I know how he got there “The Church” put him there. When they gave the oilmen (Republican’s) 700 billion dollars for John McCain to throw the election. Children wrote songs about him; they named his limo the beast they called him renegade (lawless one).

Was I the only one on planet Earth that hoped he was the antichrist?  I mean all the signs were there I said to others I hope he is I want to wrap my arms around him and thank him for coming my Jesus is next.  Shortly after I made that announcement, I am taken into Egypt by the Spirit, and HE opens my eyes to the truth.

Blessed are the pure in heart for they shall see God.

The pastor who plays devil’s advocate will be spending a lot of time with his god because he knows what he does and what he is doing.  He lies to his congregation that he knows God and knows what God wants, he humiliated me in front of my stepfather just before he died by making two claims in his presence Pyramids would confuse people and God had no hand in the numbering of scripture. Both accounts I can prove are untrue, making him a liar.

My stepfather died, thinking I was unstable.

The statement that he loved his congregation was also a lie.  Do you love their lost loved ones?  How is hiding the truth or lying helping them?  He had a known outspoken unregenerated Papist who acted as his treasure and deacon under him for near twenty years or more. Which means he was a supporter of Rome and the work they do.   He said we had to be discerning because these days are evil, but it is he and others like him who want to see the world burn as they look for God’s justice on the wicked to come top-down.

Psalms 12:6-8
(6)  The words of the LORD are pure words: as silver tried in a furnace of earth, purified seven times.
(7)  Thou shalt keep them, O LORD, thou shalt preserve them from this generation for ever.
(8)  The wicked walk on every side, when the vilest men are exalted.

NASB (his version) THEY ARE NOT EQUAL OR MEAN THE SAME.

Psalms 12:6-8
(6)  The words of the LORD are pure words; As silver tried in a furnace on the earth, refined seven times.
(7)  You, O LORD, will keep them; You will preserve him from this generation forever.
The topic is the word pure words not a him.
(8)  The wicked strut about on every side When vileness is exalted among the sons of men.
It is vile men that are exalted not vileness the word was not purified here but refined to suit the new age doctrines. 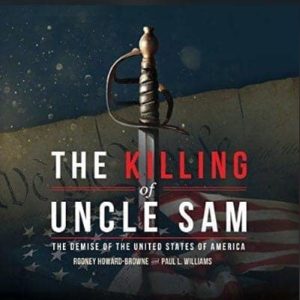 The following audio clip below is of the wealthy plotting against the Church here for educational purpose and to help promote the sale of this book which is done by a Christian.
Destroy our foundation to destroy our nation.
Yale University and Harvard University were founded as Theological Seminaries as their primary purpose, so what has happened to the conviction of the church?  When did anything goes and listening to talking heads become more important than the word of God?  This may help explain it in Chapter 8 of “The Killing of Uncle Sam.”  “The Rise of Foundations”  this was to destroy ours using their wealth. This book comes with an outline and pictures in a PDF file well worth the investment. If you do not have Audible by Amazon its worth the investment, they have the Bible on audio as well.
The Apostolic continuation like the trail of the ant has been erased and reassigned to deception.

To be playing devil’s advocate or looking for God’s justice coming from the top reveals they know not God as well as they say. Father saw this coming and prepared accordingly.

To say you love your congregation and not open up the word of God or lift Jesus the way he wants is a lie.

They will tell you they have the holy spirit but see no need to put money into the church or try and open the eyes of the blind or ask the Spirit to reveal the harlot they would rather protect her leaving her blind children to die without Jesus.

If I offended you please forgive me I am just trying to open your eyes and set your loved ones free, also I hope to open your Pastor’s eyes to see the truth, they can know God better by desiring to defend HIS word and not trade it in for questionable gifts born from an ecumenical mystique.

1 John 1:5-10
(5)  This then is the message which we have heard of him, and declare unto you, that God is light, and in him is no darkness at all.
(6)  If we say that we have fellowship with him, and walk in darkness, we lie, and do not the truth:
(7)  But if we walk in the light, as he is in the light, we have fellowship one with another, and the blood of Jesus Christ his Son cleanseth us from all sin.
(8)  If we say that we have no sin, we deceive ourselves, and the truth is not in us.
(9)  If we confess our sins, he is faithful and just to forgive us our sins, and to cleanse us from all unrighteousness.
(10)  If we say that we have not sinned, we make him a liar, and his word is not in us.

I am not going to point and blame others why I did not turn stones to bread or walk on water it was horrible of me to try and open the word and share the truth besides God knows who those people are I don’t have to pass blame HE has got it.

Does anyone else see the crop circles as gobbly gook?

Permanent link to this article: https://thedivineplan.org/forgiveness-the-call-of-the-cross-you-are-forgiven-if-you-want-to-be/