Holy Unto the LORD set Apart for HIMSELF.

Frédéric Auguste Bartholdi  Born 2 August 1834 – Died 4 October 1904. He was a French sculptor who is best known for designing Liberty Enlightening the World, commonly known as the Statue of Liberty. 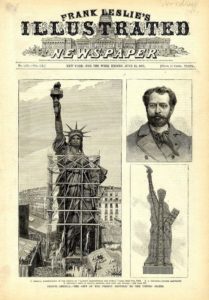 The Statue of Liberty sits in New York Harbor and was a gift from the French People that welcomed many immigrants to this promised land free from the distress of their native lands with a promise of a better life for those who would rise to the occasion.  America the land of liberty and justice for all. Where a man could work and see the fruit of his labors provide for a family and walk with dignity.  He could worship without fear of reprisal the SON of the living God.

We still can for a little while longer just enough time to fill in the rest of the details and give the world a clearer advantage in choosing to live in heaven or to burn in hell. Reject the mark and come home or take the mark and be tormented forever. Heaven is better than America was on its best day times infinity.

Bartholdi was born in Colmar, France, 2 August 1834. He was born to a family of German Protestant (Alsatian) heritage, with his family name romanticized from Barthold.

He was a believer and a Protestant, so you know he was on the right track.

What does the appointed time’s list tell us?   God is revealing our time is the time.

Permanent link to this article: https://thedivineplan.org/frederic-auguste-bartholdi-made-the-appointed-times-list/