From ite’s to ism’s finding and fighting our way in.

Another Exodus this time to the real promised land. 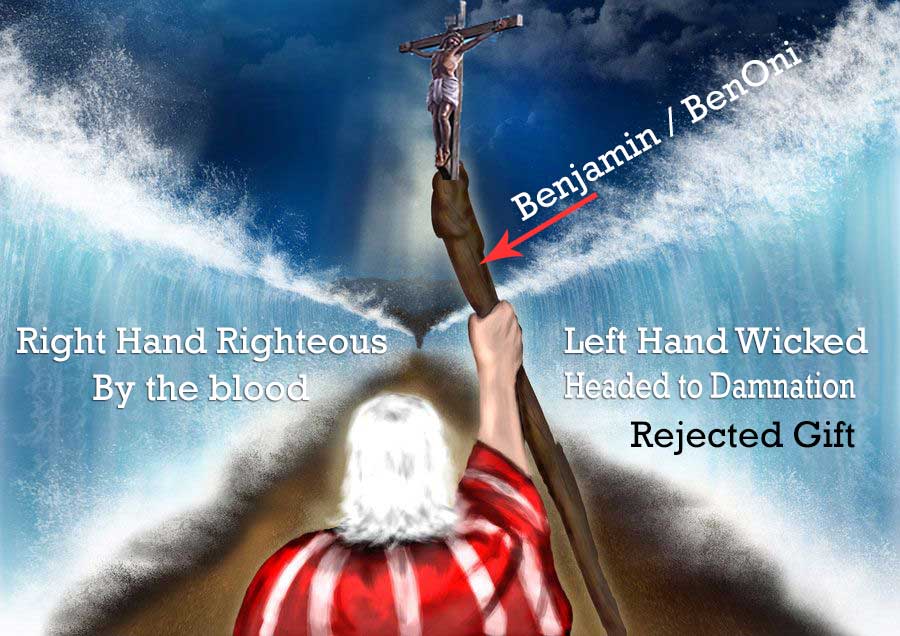 One of the reasons the enemy fought for Moses body was that he needed another. The one he had decayed and he knew his time would come after an Exodus and it would be a leader of God’s people.

To help win the world to Christ, you need to spill a little information now and then.

How do we know he had a body?  Genesis 6:3 Which cleverly comes after the passage that the Son’s of God (Angels) looked upon the daughters of men and took for themselves wives. This story coincidently?!? Appears in the book of Enoch Chapter 6 as well and is confirmation it was not the Son’s or descendants of Seth based again upon Genesis 6:3 we are surrounded by liars and people who would hide things from us to support the enemy of our souls.

This rebellion was led by an angel called  Sêmîazâz who we know today by another name as the Prince of Persia who’s followers mourn the day of rebellion when they gave up their estate in heaven for relations with the daughters of men. Their spirit and stronghold of that area are still here today and they greatly remorse over that day and in that part of the world they practically make their women invisible and mistreat them. These spirits influence a whole culture and are sworn not to allow Satan’s angels to take the land they seek.

Gabriel struck the deal under the leading of the Father with the kings of Persia in Daniel 10:13-14  But the prince of the kingdom of Persia withstood me one and twenty days: but, lo, Michael, one of the chief princes, came to help me; and I remained there with the kings of Persia.
(14)  Now I am come to make thee understand what shall befall thy people in the latter days: for yet the vision is for many days.

So look closely the devil and his angels had no interest in sex or women it was not a taste they ever acquired before dying and becoming spirit again.  Women were not created until further along in the war long after Adam was created to be God’s new friend and then only after he named all the animals which did not happen in hours but possibly months.  God saw it was not good for man to be alone and in order to eventually reveal the SON of man to Angel’s women were going to be necessary. The enemy could not approach Adam directly because of his status of dominion over the earth.  So he had to get to God’s man indirectly through another. 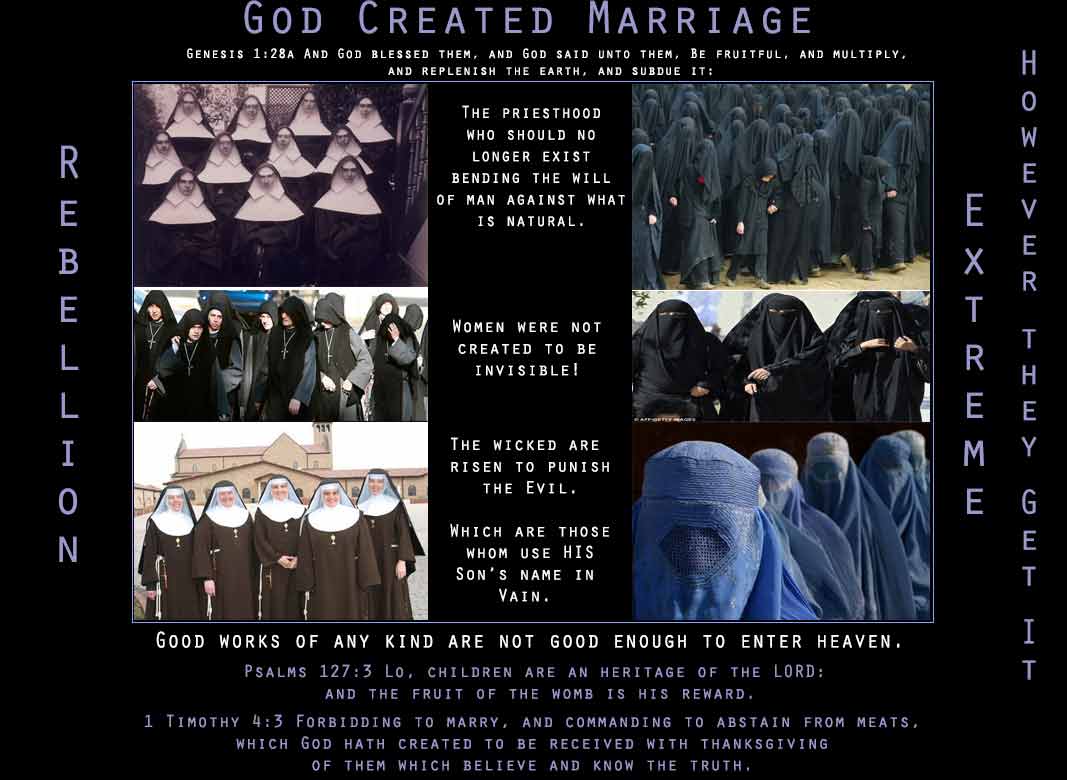 Those who have studied the Bible know that before the fall of man, a heavenly rebellion took place. No women existed, so the first spirits of the rebellion wanted to rule above the SON. Women were sought after by angels in the second rebellion before the flood. One is Satan’s group, the other is Prince of Persia’s group; however without the spirit of G-d in you, any demon can use you.

The making of man comes long after the destruction of their cities in an attempt to start a new world order that we read about in Jeremiah 4:23-28
(23)  I beheld the earth, and, lo, it was without form, and void; and the heavens, and they had no light.
(24)  I beheld the mountains, and, lo, they trembled, and all the hills moved lightly.
(25)  I beheld, and, lo, there was no man, and all the birds of the heavens were fled.
(26)  I beheld, and, lo, the fruitful place was a wilderness, and all the cities thereof were broken down at the presence of the LORD, and by his fierce anger.
(27)  For thus hath the LORD said, The whole land shall be desolate; yet will I not make a full end.
(28)  For this shall the earth mourn, and the heavens above be black: because I have spoken it, I have purposed it, and will not repent, neither will I turn back from it.

Most new translations have the devil leaving out details. Like the word replenish is removed from the devil’s translations in order to build his new world order using us. So if you got one of his translations than why do you still have it? If his followers had blown up the Parliament with King James inside in the gunpowder plot of 1605 than we wouldn’t have had a reformation or a revival. So every snickerer behind the pulpit over the KJV is in agreement with Satan but to spiritual to notice it.

Those who plotted to kill King James are now best friends with those who have his new translations. They even have the power to slay men in the spirit which is a Jesuit cooked up deception to hide the word by making something else more important than the word.

The people Moses led did not like him, they moaned and complained and wanted him to do this or that.  Moses stood by the word of God when in anger at them he struck the rock rather than to speak to it to have its waters pour forth,  the rock being a picture of Christ our solid rock who need never be sacrificed but once even if it is just a mock sacrifice which gives itself away as a mocking of Christ. Those who would strike it many times are not worthy to make the next exodus.

It would take a person with a Yale law degree with a major in theology and CIA training to even notice something like that.

The number depicted in the photo below 322 is the numbers of prophecies Jesus fulfilled. The clock’s hands are always precisely at 8.00 in military time that is 20 hundred hours add that to the 12 for 32 sixteen men are hiding one hand, but we know there are 32 this was a theological school and this is its Skull and Bones society. The skull represents death claiming as this man is so shall you be. Many CIA operatives came out of this school.  That’s president George Bush on the left of the grandfather clock Prescott Bush wash the grandfather of G.W.Bush the last president duly elected by vote before Rome took over America at the tune of 700 billion dollars. 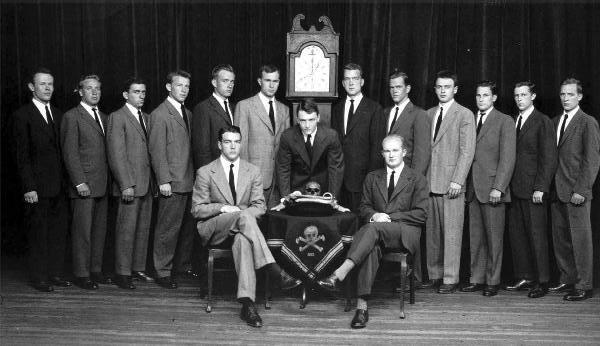 Isaiah 9:6-7
(6)  For unto us a child is born, unto us a son is given: and the government shall be upon his shoulder: and his name shall be called Wonderful, Counsellor, The mighty God, The everlasting Father, The Prince of Peace.
(7)  Of the increase of his government and peace there shall be no end, upon the throne of David, and upon his kingdom, to order it, and to establish it with judgment and with justice from henceforth even for ever. The zeal of the LORD of hosts will perform this.

Like Moses we are at it again, I have a burden to carry it is all your loved one’s family and friends at work that need to be saved. So to give you an idea of what I see, it is a tight rope strung across shark-infested waters while everyone places the hope of me leading the lost to Christ before the enemy gets his seven years. While they all shake the rope and yell go a little faster, go slower, lean left, lean right,  lift a leg. When what is really required is quiet prayer and take your hands off the rope and trust Jesus he found the right candidate.

What part of the one world leader don’t you get?

I only point to the antichrist he is one who denies Christ came in the flesh and is the son of God. He rejects the teachings of Christ he hides the word of God, mock sacrificing is the people denying the finished work as well along with the non-Catholic supporters.   He accuses others of crimes they did not commit he bears false witness along with his followers. 9/11 the perfect example that was lies fed to American’s by the Catholic’s sitting in amoung us.  It was the Jesuits among Islam that claimed America because of its wealth and status was the great Satan or do you only think they only invade Protestant Churches?   It was the CIA who taught them to fight and gave them weapons a system set up to protect Christians only Catholic Christians.  Russian communism is less evil than Chinese communism because only one of those caters to Rome to persecute Protestants the other was to destroy the wealth of the Czars to take it for themselves.  While over here they wanted us to take their oil from them.   He feels the wealth of the world in the hands of the church would blow up the world. He makes the gifts more important than the word especially the ones he does best.

Jesus is coming back to a Nazi-like America and look who helped build it with the Jesuits the AG church who could not discern what was going on, yes you love Christ and Christ loves Israel couldn’t put something in the charter that said we do not support a priesthood that denies the work of Christ and supports idols?

How can Pentecostalism be so blind?

Many shall say on that day did we not do this in your name?

And most of all he Hates God,  the SON of God, along with you and I made in the image of God.

Permanent link to this article: https://thedivineplan.org/holy-moses-were-doing-it-again/