Sound the Alarm the Crops are Going to Burn.

I thought the Devil hated Children?

I know HE hates God so ergo he hates children because God loves them so much.

During this time of year, I grow my beard out and because of my size, I look like the guy more people are hoping to see than Jesus.

The Legend of St. Nicholas

The legend of Santa Claus can be traced back hundreds of years to a monk named St. Nicholas. It is believed that Nicholas was born sometime around 280 A.D. in Patara, near Myra in modern-day Turkey. Much admired for his piety and kindness, St. Nicholas became the subject of many legends. It is said that he gave away all of his inherited wealth and traveled the countryside helping the poor and sick. One of the best known of the St. Nicholas stories is that he saved three poor sisters from being sold into slavery or prostitution by their father by providing them with a dowry so that they could be married.

Over the course of many years, Nicholas’s popularity spread and he became known as the protector of children and sailors. His feast day is celebrated on the anniversary of his death, December 6. This was traditionally considered a lucky day to make large purchases or to get married. By the Renaissance, St. Nicholas was the most popular saint in Europe. Even after the Protestant Reformation, when the veneration of saints began to be discouraged, St. Nicholas maintained a positive reputation, especially in Holland.

My Take on Things.

The other day  I was picking up my mail and this little 6-year-old boy was smiling from ear to ear and he gave me this little wave.  I put my finger up to my nose and smiled back he thought I could be Sanat and he was taking no chances.

What I would have liked to have said to him is…

I’m resigning this is my last year the animal rights activists are on my case the reindeer are getting too old and I’ve been breaking into homes for over  1700 years somehow I feel I am setting this bad example.  This Babel character God has awakened has me freaked out!    OSHA came into the shop started changing things, elves found better Medical elsewhere.  Then there is  this phenomenal population increase the naughty list keeps  getting longer because everyone is neglecting Jesus Christ the Only Begotten Son of God born from the Virgin Mary.

Which reminds me,  people dressing like me should be placed on the FBI’s child abduction watch lists.  How did my day end up being the same day my church chose to celebrate Jesus’s birthday?  I come in with a  Ho Ho Ho, rather than a HOLY HOLY HOLY.  What kind of saint am I  stealing the little guy’s thunder?

The good news is kids  Jesus is coming, now don’t go and cry.  I know you would much rather have me, but it has been a good run we must now make room for Jesus.

And the difference is?

Matthew 13:41-42 KJV The Son of man shall send forth his angels, and they shall gather out of his kingdom all things that offend, and them which do iniquity; (42) And shall cast them into a furnace of fire: there shall be wailing and gnashing of teeth.

According to the Boston Globe’s “Spotlight”  Article, this had been going on for a long long time.

The painting is called  -Saint Nicholas helping children by Vitale DaBologna he knew what was going on even back in the 1300’s. I hope he’s helping them get dressed is that their mother kneeling in prayer or begging him to spare her children? I’m going with the latter on this. 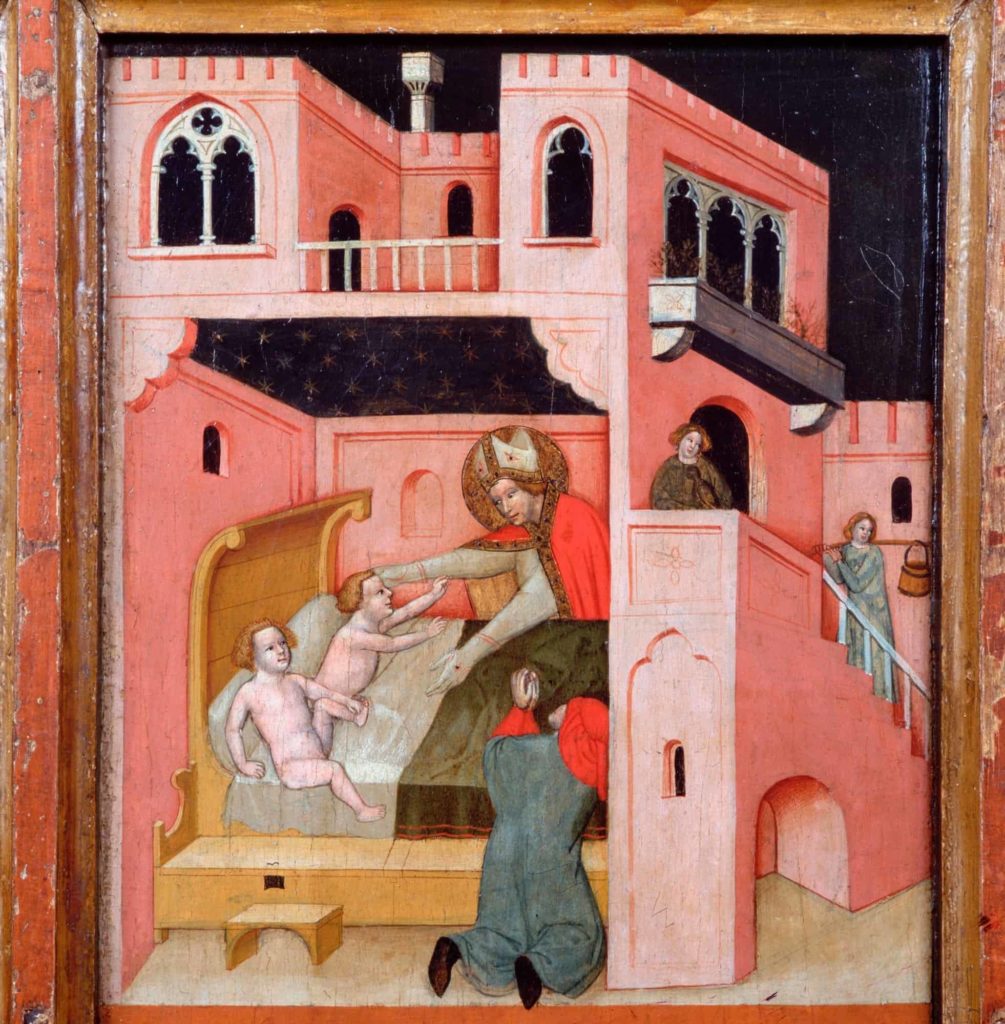 Why couldn’t Christians come up with better?  Why must we fight through all the lies to get to the truth?

Satan does not like children and seeks access to them at an early age to prevent them from finding the truth.  Well, Mommy and Daddy lie so it must be OK? It’s just another story to keep us in line.

I assure you it is not and Jesus is at the door.

Permanent link to this article: https://thedivineplan.org/i-thought-the-devil-hated-children/