Interceding for those who made poor life Choices.

This image has been used before in a post named “Congratulations, Abraham.  It’s a Boy!” The passage this points to can be found in counting the circles on the male upper torso.  Knowing the story is just as important.  In the old testament and the new only the men were counted, not the women or children.  So we can safely say that the smaller circles on the female mean we are not to count those circles the same for the male’s lower torso. 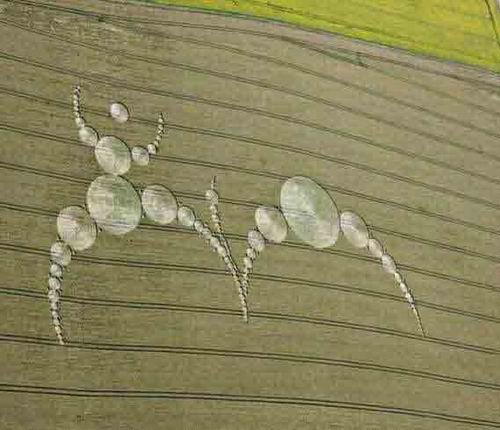 They were made this way to show that the angels know the difference between sexes; they know many of you need help with that.  They are leaving behind the wicked and taking with them the righteous in the rapture of the Church.  Those left behind who even claimed to be Christian have or are doing something that offends God or them.

Who would that be?  First, Jesus made it clear HE came to the house of Israel first, much like Joseph, HE rescues the Gentiles from famine by oddly storing up the seven years of harvest.  Harvests always involve crops, and well, there you go, crop circles.  Then there are seven years of terrible tribulation, famine, no word, no joy, no celebrating,  only running and hiding from the not-so-future Nazis and inquisitors that will determine if you are a true Christian or not.

With their covid reach and technology, there will be no place to hide; I wouldn’t want to stay. 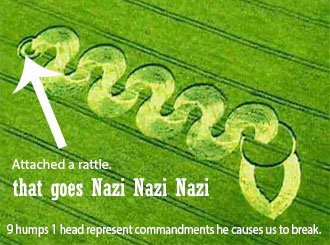 Getting the house of Israel into the hen house to avoid the coming storm, Nazis on the right-wing,  Nazis on the left, and God in the last days is calling HIS people to come out of the harlot because she has built the gallows for Christians.  Only to find herself and her cohorts left behind which is a clear indicator they were not washed in the lamb’s blood.  Those who allowed them to use the LORD’s name in vain and keep the word of God hidden from the lost will also be in peril.

They offended the angels who understand Israel represents them.

Siding with the priests of Jezebel places you in the enemy’s camp. It’s no longer Baal worship; it is anything and anyone worship including a man named Jesus who doesn’t mind idols and daily being eaten up.

I am just a truck driver with the initials teachers have designated B.A.B.E.L. as a place of confusion. If you remove the first B, the confusion is gone.   His brother murdered him because the enemy thought Abel or through Abel’s lineage would come the child that would crush his head.  So is it any wonder who was the first principality over the kingdom of Babylon?  What does God mean that the first shall be last?

I am not looking for followers I’m looking for leaders to lead others to Christ and recognize what is good from what is evil.

The lamps of God made the images, and this particular one with male, female, and child had witnesses to its construction.  Unfortunately, they swapped out the video recorder’s tape; they blinked and missed its creation.

Today sin is as bad as it was in Noah’s day; the difference is Jesus Christ is here to help us overcome the world.  God does not change when it comes to morality.  What HE hated in the old testament HE still finds abhorrent today.  Gender confused individuals are only that way because they are not walking in the victory of Christ who made them the gender they are,  knowing that is where they would be happiest in life with HIM at the center of their lives.

He is not there so it is no wonder the devils have them confused, and who does God blame for it?  Those who stole the keys locked the windows of heaven and opened the gates of hell by hiding the word, and without the word what hope does man have?

I came to bring hope and slay a dragon, and his ministers of righteousness wanted me to be someone completely different.

The only way to truly know God is through HIS teachings and the prophets’ words concerning HIS coming.   Jesus fulfilled 322 prophecies recorded in the old testament.  Some claim  355; others say 365.  I’m going with the 322 because that’s a skull and bones societies favorite number.

The land this was made on was contoured.  The circles are elongated on the surface, so they look symmetrical when the picture is taken from the air.

Seventy years ago, we couldn’t have done it this way, but we can use technology for the cattle drive with the Ultralite single-seater planes and drones.

The male torso is eighteen in total; in Genesis 18, God promises Abraham  Sarah will give birth to a son.  She laughs at the thought of having a son in her old age, and God delays the blessing because of the denial that she laughed.

This is the same chapter Abraham intercedes for the people of Sodom and Gomorrah.  Genesis 18:23 KJV And Abraham drew near, and said, Wilt thou also destroy the righteous with the wicked?  He begins with 50 righteous, and God said he would not destroy it if he could find 50, then asks for 45, then 40, then  30, and again 20 finally, he asks for ten, and God would have spared it for ten righteous people.

Abraham interceded for the righteous in the cities, not the wicked.

God is rich in mercy; there were not ten righteous people in the cities of Sodom and Gomorrah.   HIS angels go down and pull Lots family out because of his relationship with Abraham, his nephew.

Hell is a real place, and I do not want anyone to go there,  neither does God desire to send anyone there.  Sin must be destroyed, and it can only be removed by faith in Christ in HIS finished work alone.  There are Seven Churches in Revelation that Jesus sends letters to; that exact nature is in many of the Church’s today.  There is not one super Church.  If one of these letters was written to Catholicism which letter would it be?  Would that be the group you want to be associated with on judgment day and stand with?

This Church was responsible for keeping the word away from the lost and tampered with its text; they placed offenses in the face of Abraham’s children?

When the word says the elect cannot be deceived, is not Abrahams the elect are not his descendants? We are grafted into the vine; even our children are possible candidates for the 144,000 what did you leave them to survive in the tribulation?

I would do everything in my power to make sure not one of them is left behind in the tribulation.  That is why they need the word of God more than they need Benny Hinn. The sooner the Church realizes the value of the SON of God along with HIS honor in the presence of the angels who are represented by Israel the better off the Church will be.

The angels realize if Lucifer were to win, their existence with him would be eternal torture.

God does not forget HIS promises; HE does not give up on Israel, and the only replacement theology there should be is that  Abel replaced Lucifer.

As examples for Christ, Catholicism was the worst!

Psalms 10:2 KJV
(2)  The wicked in his pride doth persecute the poor: let them be taken in the devices they have imagined.

Psalms 33:10 KJV
(10)  The LORD bringeth the counsel of the heathen to naught: he maketh the devices of the people of none effect.

Name ten reasons why we should not leave Rome to their devices along with their followers that set out to destroy America and other nations?  If we as a body cannot get people who are so close but still missing the mark into the kingdom,  how are we to save those much further away?  Then again, maybe they are the furthest away?

Wild cattle can be herded but the stronger-willed ones will not be. So they will be left behind,  so you leave them behind, and God’s man, the antichrist, will chase them to the cross or send them to hell.

Permanent link to this article: https://thedivineplan.org/interceding-for-those-who-made-poor-life-choices/