Darkness Tries to Hide the Light

God gave Rome the boot long before Christ was born and we are called in the end to do the Same.

Jesus Never Lied – That means there is a place for sinners.

The reason behind Christmas is to reconcile sinners back to God.

Jesus could not ever tell a lie because of who lies are from. He was the truth personified.

In the end, he cast truth to the ground to practice and prosper by reason of the daily sacrifice Daniel 8:12

Jesus did not have to practice the truth; HE is the WAY, the TRUTH, and the Life.

The image below has seven arms of half-eaten Eucharists (Angelic hosts) with eight whole ones following behind surrounding the older ones to throw the enemy into the bottomless pit; aiding them is the seven arrows representing the seven churches of Revelation that the angels stand over. 7 x 8 = 56 Psalm 56:1-2.

We do not counterfeit what is not valuable, and the same goes for the spiritual.

Christ’s love is real and HE desires that none should perish.

Hiding the word of God from the lost is our enemy’s only concern, keeping them ignorant to the message of the prophets and the voice of God heard through them. If they hear it they may seek to repent in favor of HIS love rather than suffer the eternal separation against those who hate HIS SON and do not honor HIS Fathers words.

Words spoke to the prophets that have revealed they are from God by the fulfillment of them.

Unique among all books ever written, the Bible accurately foretells specific events-in detail-many years, sometimes centuries, before they occur. Approximately 2,500 prophecies appear in the pages of the Bible, about 2,000 of which already have been fulfilled to the letter—no errors.

Given that the Bible proves so reliable a document, there is every reason to expect that the remaining 500 prophecies, those slated for the “time of the end,” also will be fulfilled to the last letter. Who can afford to ignore these coming events, much less miss out on the immeasurable blessings offered to anyone and everyone who submits to the control of the Bible’s author, Jesus Christ? Would a reasonable person take lightly God’s warning of judgment for those who reject what they know to be true about Jesus Christ and the Bible, or who reject Jesus’ claim on their lives?

Taken from Fulfilled Prophecy: Evidence for the Reliability of the Bible

Love the giver of the gift more than the gift itself is word to the wise.

Nature is designed to educate; if it goes against nature, it goes against design, it goes against God’s design.  When HIS Church does not honor HIS word and allows the wicked to flourish and supports them as well then are they not under some dark spell where no one wants to hear the truth?

I will not bow to their rock. I would rather stand on my ROCK and speak to it than keep sacrificing it on a mock altar.

2 Samuel 24:15 KJV (888 555)
So the LORD sent a pestilence upon Israel from the morning even to the time appointed: and there died of the people from Dan even to Beersheba seventy thousand men.

Keeping the context it was because of David’s sin the pestilence came his sin he numbered the people.

Joshua 24:15 KJV (888 555)
And if it seem evil unto you to serve the LORD, choose you this day whom ye will serve; whether the gods which your fathers served that were on the other side of the flood, or the gods of the Amorites, in whose land ye dwell: but as for me and my house, we will serve the LORD.

Our sin that brought the pestilence leaving HIS SON’s effigy lying in the dirt.  God created man to reveal to the angels that the SON of GOD has value we pick up where Lucifer failed.

Jeremiah 4:21-28 KJV
(21)  How long shall I see the standard, and hear the sound of the trumpet?
(22)  For my people is foolish, they have not known me; they are sottish children, and they have none understanding: they are wise to do evil, but to do good they have no knowledge.
(23)  I beheld the earth, and, lo, it was without form, and void; and the heavens, and they had no light.
(24)  I beheld the mountains, and, lo, they trembled, and all the hills moved lightly.
(25)  I beheld, and, lo, there was no man, and all the birds of the heavens were fled.
(26)  I beheld, and, lo, the fruitful place was a wilderness, and all the cities thereof were broken down at the presence of the LORD, and by his fierce anger.
(27)  For thus hath the LORD said, The whole land shall be desolate; yet will I not make a full end.
(28)  For this shall the earth mourn, and the heavens above be black: because I have spoken it, I have purposed it, and will not repent, neither will I turn back from it.

We all have a part to play, and every one of us has a role to play in service to God, whether that is being a loving father or mother we do so to the glory of God.  It is Christ in us that helps us perform the prepared works for us from the foundation of the world that we should walk in them with HIM living in us; HE lifted HIS Father with HIS words, and in turn, the Father lifted HIM.

Jesus did not speak out on subjects that HE knew the house of Israel already understood. They knew that perversion was an abomination to God, and as this crop circle reveals, the angels will be leaving those behind that do not honor God’s design.

Done within seconds and caught on camera, these circles were made oval to use the land’s contour, so when looking down, they look like perfect circles. It would be hard to fake that. 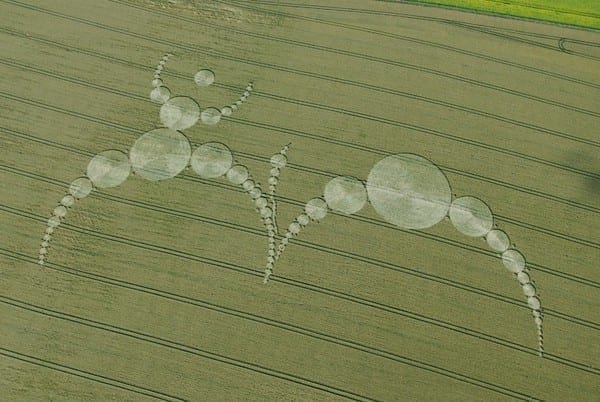 Children and women have never numbered in the old testament. In this formation, the tiny circles outline each torso; only the male circles that are not outlined are counted 18 in all.  In Genesis 18, we find the promise of a son to be born to Abraham through Sarah; we also find that Abraham Intercedes for Sodom.

The image lets us know that marriage is too be between a man and a woman. God is the same yesterday, today, and forever; if you do not honor HIS word today, you will not honor it in heaven, giving HIM no choice but allow you to be given over to a reprobate mind who thinks such lifestyles are acceptable to God when the word makes it clear in many places it is not.

Romans 1:18-27 KJV
(18)  For the wrath of God is revealed from heaven against all ungodliness and unrighteousness of men, who hold the truth in unrighteousness;
(19)  Because that which may be known of God is manifest in them; for God hath shewed it unto them.
(20)  For the invisible things of him from the creation of the world are clearly seen, being understood by the things that are made, even his eternal power and Godhead; so that they are without excuse:
(21)  Because that, when they knew God, they glorified him not as God, neither were thankful; but became vain in their imaginations, and their foolish heart was darkened.
(22)  Professing themselves to be wise, they became fools,
(23)  And changed the glory of the uncorruptible God into an image made like to corruptible man, and to birds, and fourfooted beasts, and creeping things.
(24)  Wherefore God also gave them up to uncleanness through the lusts of their own hearts, to dishonour their own bodies between themselves:
(25)  Who changed the truth of God into a lie, and worshipped and served the creature more than the Creator, who is blessed for ever. Amen.
(26)  For this cause God gave them up unto vile affections: for even their women did change the natural use into that which is against nature:
(27)  And likewise also the men, leaving the natural use of the woman, burned in their lust one toward another; men with men working that which is unseemly, and receiving in themselves that recompence of their error which was meet.

Don’t make the mistake of following the blind guides Jesus warned us about,  be like Jesus, and lift the Father by lifting up HIS only begotten SON who honored HIS Fathers word.

The Chumps Who Had to Move the Tabernacle

Permanent link to this article: https://thedivineplan.org/jesus-never-lied-that-means-there-is-a-place-for-sinners/