The Key to Revival Episode I “Understanding-Rocket Man”

The Fifth commandment we are called to honor our Mother and Father it is the one that comes with a promise of long life we are at the end of the age it would be no less than eternal life.

The fifth position on the key is marked out and holds the two sections together if it was gone the key would fail all parts add to 15 which we find is a number for mercy it is 3×5 or 555 or the other half of Jesus 3.5 years that he set aside.

Genesis 15:13-14 pointed to the most significant financial treasure in our known world. God had the Egyptians pay the Hebrews for their labor of hiding the symbols verse 14 that Lucifer built when he was here Jeremiah 4:28. I get a higher reward because I played the game well and saw the truth; my family is going to be HUGE!

No parent wants to see their child turn away from the care of God and the love of Jesus.  In the same aspect, no child who knows Christ wants his family members to be separated from God for all eternity.

Hell is a real place, meant for the devil and his angels. We will see some of them in the last Episode as we explore the last of the commandments beginning with number six the one we break every day with our hate for God and each other who are made in HIS image.

Religion does not get you to heaven; a relationship with Christ does. If you use any other mediator to get into heaven or talk to God, you missed the whole purpose of the crucifixion.

777 is 21, and we are in the 21′ st century, and everything is here that needs to be here,  now we will divide the spoils of war.  Those who will be staying to take the mark will not be attending our churches and will opt for eternal torment.   Those who stand presently with the harlot, may or may not take the mark. It depends on the level of repentance in the tribulation. However, because they assisted in placing stumbling blocks to the blind and held the Jewish people from finding Christ because they claimed she was Christian might find themselves under the strong delusion,  they will remain behind.

The strong delusion is that you have a say or vote in those who lead you.  Are you not tired of picking the lesser of two evils and both placed there by the same Church? 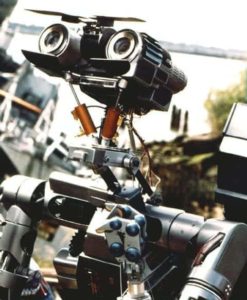 “Short Circuit”  was a film that gave us the idea that a robot or machine “Number Five”  became a sentient being with free will and thought.  Our God did not make robots but gave life and choice to HIS creation.  Some believe free will is an illusion; I assure you it is not. I am exercising my free will just as the ministers who know me are exercising theirs.

Keep in mind the original covering Cherub was to bring worship back to God. While in our fallen state he does that through persecution and tests our commitment to God.

I seek to open the word and lift the name of Jesus sending souls running to the cross and they the “leaders of the Church who have you vote for cultists like Romemoney and Catholic educated Presidents like Trump,” they would instead I perform signs and wonders.

I leave the signs and wonders to God as I do the judgment of the wicked and the wicked are not going to be judged by the wicked. So why do the ones who claim to know God look at the top of the hill for justice to come?  It has never been his world to do with what he pleases. It has always belonged to God as everything everywhere does except for the hearts of all men and women.

Again even in the church, God continues to test the heart and the loyalty to Christ.

Well, if I was headed to hell anyway, indeed I was going the moment I found the symbols of the battle in Egypt and started getting the word opened up to the world.  It was a guarantee I would be condemned no one wanted to honor the truth or see what Jesus meant about HIM being lifted. Pentecostals’ have condemned millions to hell in support of the harlot so what’s one more?

Honor your Mother and your Father the fifth commandment I wanted you to know it was not Adam and Eve who brought this wickedness upon us, sure they disobeyed, but they never mocked God or did what brought the overall curse on the Earth.

Jeremiah 4:27  For thus hath the LORD said, The whole land shall be desolate; yet will I not make a full end.

Jeremiah 4:28  For this shall the earth mourn, and the heavens above be black: because I have spoken it, I have purposed it, and will not repent, neither will I turn back from it.

That was not Adam and Eve.

These same individuals who are the “Apostolic” were looking for the one world leader at the top of the hill, not one at the bottom who could lift them up to bring glory to God.

I was told by one that I was not to consider myself better than another after I proclaimed I had won. So doing this, this way is a lot harder and not as many souls will be saved.

That is after all the other one’s goal leaving souls behind, you may say you wouldn’t,  but if left behind you won’t get angry at God???  You are OK with missing the most significant moment of the entire plan not seeing physical death. But to be changed into immortal,  incorruptible never to fear instant eternal joy and peace again?  That is why Islam will be chopping off Catholic heads in the tribulation all those Bishops and Arch-Bishops wouldn’t have been Bishops had they honored God’s word. The church is not like the Boy Scouts where you climb up the ranks, or the military God lifts you , and it is usually noteworthy like Daniel or Joseph even David.  When Islam misses that day, they are going to know who lied to them and kept them from the truth.

I heard a teaching about the church being family well I want a bigger family that is why I do this for the lost tribes of Israel and the ones who think they are going to heaven for their works of infant baptism or cookie eating and supported CIA terrorists in America putting it all under their Roman god Ceaser who is just a man wearing new clothes.

You want signs and wonders well they come behind the word and not in front of it the word preached brings forth repentance,  restores relationship,  brings real hope to the repentant. The most significant healing is having your blind eyes open and love pouring from your heart as it touches others around you.

One way is feeding the hungry clothing the poor and sheltering the homeless all in Jesus name.

Adam and Eve were the parents of us all and they did not ooze up from the ground but were purposely created to reveal to the angels who warred and rejected the SON of God in heaven that the SON was indeed real, to be visible he would need to come through man and just because they couldn’t see something does not mean it is not there.

Father and Son and Holy Spirit are all together the same, not individual; it is at the cross they indeed split for the first time in creation.

God fashioned man in his image, and it is the darkness in one person that causes the hate of the other it is crucial to embrace the light of Christ and allow it to burn within our hearts so that we may love others as HE loved us.

Abel is a child who seeks to honor his parents and Adam and Eve it could have been anyone’s parents. The devil is intelligent and can easily deceive many, look at how he has so many thinking a man who lives in a two bedroom apartment and drives for as transportation company is the evilest man in the world and must be stopped from rising. At least God and  I can see who is playing for the other side.

555 comes before 666 and here is wisdom he that has understanding calculate the number of the beast it is not 555.  Who is on a five dollar bill and was not always on it? He set slaves free and his friends called him Abe L.  Al Bell invented the telephone, and the number we do not use to communicate with is used by Hollywood and the film industry it is 555.  Luther nailed his 95 Theses to the door of the Castle Church in Wittenberg stopping five short of a Benjamin.

Children turn to your family and win them to Jesus I have all sorts of tools to aid and do not trust those who claim to fight the devil while they support his body hands and fingers.

Rome does not speak for Jesus!

Permanent link to this article: https://thedivineplan.org/key-to-revival-episode-ii-number-five-is-alive/