Tongue Talking the Real and the Fake

How to escape death…Jesus Died and Lived to tell Us about it.

Mrs. Doubtfire not looking as funny now is she saints?

You want a fire than you need to honor the word of God and fire means souls saved through repentance not compromise.

Those who have seen the movie “Mrs. Doubtfire” starring Robyn Williams about a husband who is separated from his children through divorce dresses up as a woman to pose as a nanny to again be close to his children it stars Sally Fields as his ex-wife who began her career as the Flying Nun but that’s for another blog that deals with seduction and acceptance of demonic doctrine.

Though Williams was a great comedian the way he ended his life reveals he was not happy on the inside he could have helped so many with sharing the wealth with those in need.  A life in Christ is a life well lived,  a life apart from Christ is not a life at all and a life with the wrong Jesus is still wrong. The difference is who sits on the throne of one’s heart.

Counterfeiters do extremely well with money and it is hard to tell, but when it comes to faith and truth it wouldn’t even pass for Monopoly money and where are the elect who see it?

Jesus said the place apart from HIM was a place of weeping and gnashing of teeth,  Williams often played the part of a homosexual in his movies and it is a clear indicator he did not know God.

He died in a debauchery act of Autoerotique asphyxiation the lack of oxygen to the brain during a moment of self-gratification. Had he given his life to Christ his body would have become Christ’s and Christ would have not allowed this to happen.

Romans 12:1-2
(1)  I beseech you therefore, brethren, by the mercies of God, that ye present your bodies a living sacrifice, holy, acceptable unto God, which is your reasonable service.
(2)  And be not conformed to this world: but be ye transformed by the renewing of your mind, that ye may prove what is that good, and acceptable, and perfect, will of God.

I would like it if the homosexual truly loved the soul of their partner even their own and fear this eternal place of torment.  The kingdom of heaven desires those who love the commandments of God. Though Jesus did not address the lifestyle while HE ministered here it is clear HIS Father was not supportive of it at all.  Jesus did not need to address it with the Jewish people they knew Lot was one of there own and barely escaped Sodom and Gomorrah that had become overrun with it.

I believe Jesus told the complete truth, right now Mr. Williams weeps profusely and is now sorry for his sins, dying in your sins is not what God wants. Placing it under the blood makes it remembered no more.  God’s love for HIS SON extends to the vilest of sinners. Invite Jesus for real in your heart and watch HIS Father go to work in your life.

God remains the same yesterday, today and forever and what was an abomination to him in the past is one to HIM now unless of course you are a liberal Christian and don’t care what HE likes or dislikes such us idols in HIS church or HIS Son being mocked by a resurrected priesthood some 300 years after Jesus completed His work at the cross.

They made the cross powerless rendering it useless as they stepped in as the mediators between man and God and hid the word from men.

Deuteronomy 22:5
(5)  The woman shall not wear that which pertaineth unto a man, neither shall a man put on a woman’s garment: for all that do so are an abomination unto the LORD thy God.

TSA agents fondling children to which the pedophiles support it as the agent doing his or her job. They would not have been in this position if not for the CIA squad wanting to take over America for their Catholic gods,  how I hate the New American Standard! 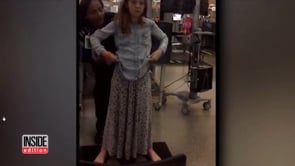 As for gender confusion, God gave you the gender HE knew you would be most happy within your walk with HIM. If you don’t know HIM because of a certain lower class of “Christian” has hidden HIS word and HIM from you, it may have become harder to find HIM but if your heart truly desires HIM HE will make HIMSELF known to you.

Those who have hidden HIS word from you and kept you from knowing HIM will be begging your forgiveness and HIS when they realize they are being left with these colorful people and the Muslims whom they refused to share the word with before Muhammed arrived. Praise God for the Muslims and the Russians who don’t put up with this kind of behavior in the New World Order they will be dealt with.

When the true saints are taken the Russians and Muslims will fill the political holes that were left behind. The Catholic church will then be exposed as the frauds they have always been.

You can have a relationship with God and the power to overcome if you so desire a right life.
Give your life to the Jesus of the Bible today you can find HIM in a King James Version which reveals everything and hides nothing.

God seeks respect for Abel and HIS offering.

Permanent link to this article: https://thedivineplan.org/mrs-doubtfire-not-looking-as-funny-now-is-she-saints/