They Are Telling You Their Plans I Still Say God Has a Better Plan Found In The Bible.

Is There a Penalty for Silencing the Watchman?

On 11/9, 2004, Iris Chang took her own life at 36. She published “The Rape of Nanking” about the atrocities committed in China’s province of Nanking. The Iris is part of the eye that controls the amount of light allowed into the optic nerve. If she knew Jesus, she would have had an inner light to lean against and trust.  How could the church not see this woman’s deep need for Jesus and encouragement?  No one undertaking such a work should do it alone.  No matter what that work may be when it comes to informing the lost and ignorant of something so important.

The watchmen needs a platform and keeping him away from the microphone keeps those whom you prayed for to remain to see history repeat itself.  Men fail to learn.

The topic she wrote about, one the world needed to hear, upset her so much that it brought about a deep depression, but she knew it could happen again; man fails to learn from his past, and this time it will be China doing it to Americans. In a system that allows for only one child and the male is preferred over females, the ratio of men to women is massive in China, there are 34 million more males than females.

The one who created this problem should release his female prisoners; God did not call women to this antichrist system.

The fruit of the womb is a blessing from the Lord Psalm 127:3.

Everyone on the planet has a purpose. Jesus said to call no man Racca or be in danger of the council. To call a man a fool, one is in danger of the judgment of hell. Racca means good for nothing.  We are here to delight in the Lord, even if it is only to say, “make the path straight the king is coming” HE is coming to deal out justice.

God told mankind from the beginning to go forth and multiply and subdue the earth; our adversary has no desire for women, only the control and power to Lord it over all without the use of wisdom or concern for the one true God. Is it no wonder he treats women with such disdain and disrespect? They were not part of his original paradigm. How will the men of God rise to defend and protect their women and children so such things like Nanking could never happen again?

These things happen because there is no fear of God or the fires of hell.

We need to become the church without spot or blemish; Pentecostalism may be growing with much of it redundant and having little or no discernment; it does not protect the word or respect the teachings.  It welcomes apostasy, ignores the commandments, and considers the darkness as light. Let’s say America was a little piece of heaven on earth where many denominations worshiped the SON without fear. Now our politicians and laws are making that an obsolete idea. Who is behind the building of the new world order? Unless the LORD builds the house (temple), they labor in vain who tries to build it.

Below are the laws of God; a perfect utopia needs only honor the first three.  Building God’s house is to be perfect, square, and on the level. A plumb bob is also necessary to see that the wall is straight. 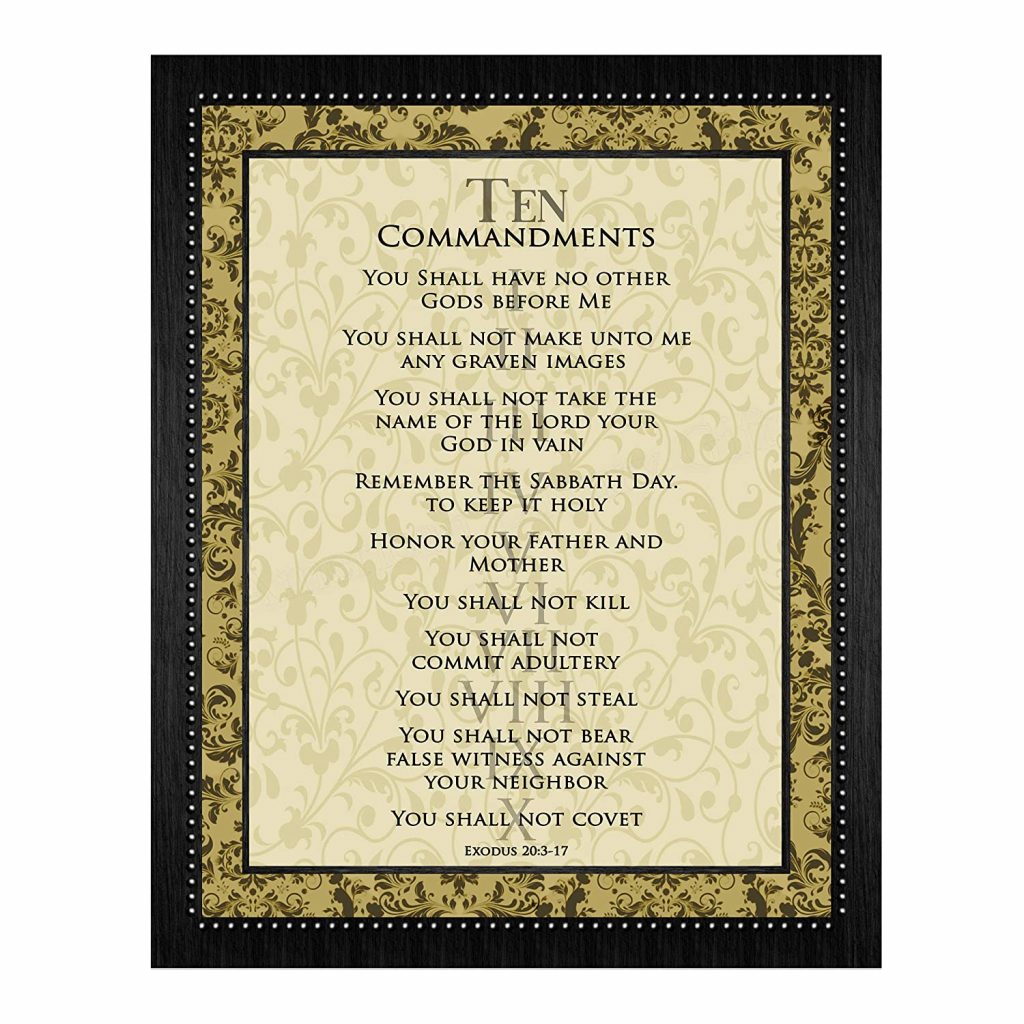 A house built by demons who care not for the things of God has in it a stench brought on by every foul thing. No amount of incense or imaginary holy water can cleanse it. Those who support it equally wreak of failure. “And he cried mightily with a strong voice, saying, Babylon the great is fallen, is fallen, and is become the habitation of devils, and the hold of every foul spirit, and a cage of every unclean and hateful bird. (Revelation 18:2 KJV)
As the people of God, we are tasked with bringing the Jewish people into the house at the end of the age to win the world.

Below, the foundations are distorted, the laws destroyed, the fear of God is not here, making wisdom absent, and every foul spirit sees no problem with it. 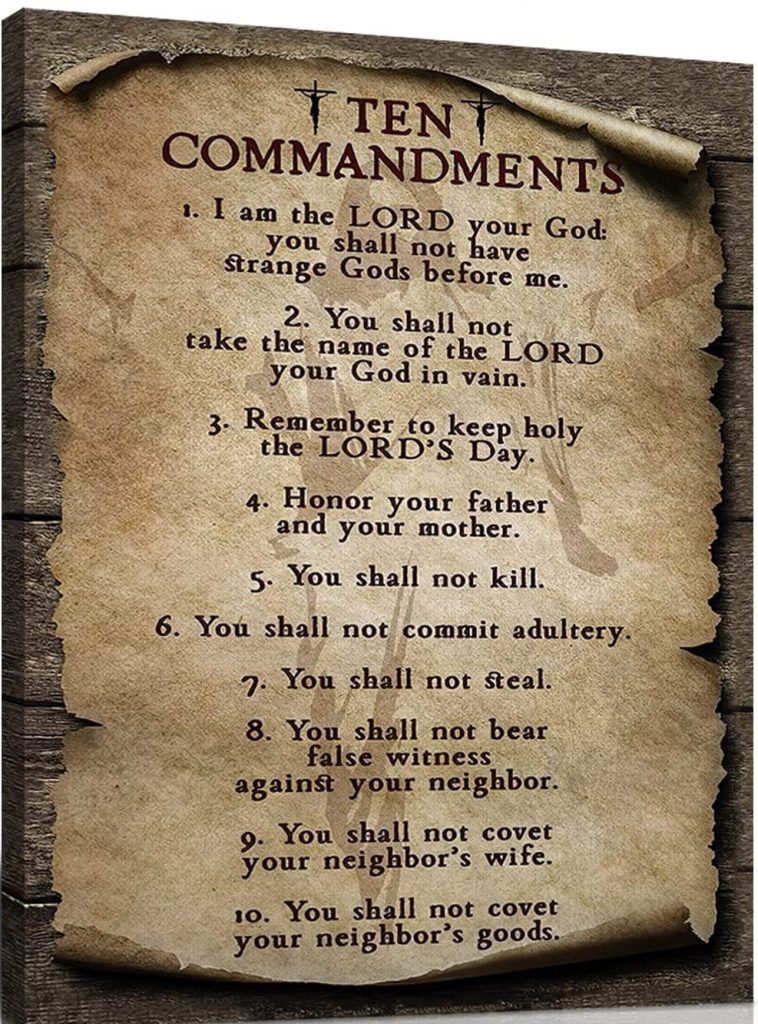 Both posters can be purchased at Amazon; the top one is posted on the closet door at my home that I see every day with the proper ten.

What has Baal have in common with light?

As Christians, we know we no longer need the temple. We are the temple; however, one is promised to the enemy that he may sit in and declare himself God. He said the SON could not make him like the most high, and the fact is “yes, we can and only we can,” even if it is for only seven years. God keeps his promises, but we represent the SON and are to assist.  He has filled our Protestant houses with Jesuit overseers defenders of the Roman Empire, who, like in the movie “Silence,” kept true Biblical Christianity out of the Island of Japan. The priests of the Jezebel system hid the word, thus locking the gates of heaven, and opened the gates of hell in doing so.

Nanking happened because 400 years earlier (see the movie “Silence”), the Catholic church insisted that the Lord’s supper could only be consecrated by one of their priests. These men do not know what the word reveals or truly teaches about Jesus having finished HIS work and ending HIS priesthood.  They did not allow the men or women of  Japan to see their actual value.  They were like so many others. People refused access to the throne directly to Jesus they needed men to be dependent on them. If they screw up the essential ten what else have they messed up? These will most definitely be called the least in God’s kingdom.

So why are so many insistent for me to bow to them, ignore them, not speak against them, and let darkness continue, with many having no problem with it.

They will, when they are left behind with it, they will not be headed to heaven but beheaded in the tribulation.

Think not that I am come to destroy the law, or the prophets: I am not come to destroy, but to fulfil. For verily I say unto you, Till heaven and earth pass, one jot or one tittle shall in no wise pass from the law, till all be fulfilled. Whosoever therefore shall break one of these least commandments, and shall teach men so, he shall be called the least in the kingdom of heaven: but whosoever shall do and teach them, the same shall be called great in the kingdom of heaven. For I say unto you, That except your righteousness shall exceed the righteousness of the scribes and Pharisees, ye shall in no case enter into the kingdom of heaven.
(Matthew 5:17-20 KJV)

The proper order is:

God the only HOLY Father
Jesus is the only Mediator between man and God
The Holy SPIRIT in man.

He must be in man to overcome the world and the god of it.

God’s name Jesus
another Holy Father visible and seen.
Cardinal (unbiblical) who picks the visible one. (please do not pick me, I’ll let God do it. HE must have a way.)
An archbishop (unbiblical)
Mary ( no prayers found in the holy writ to her)
Bishop, the husband of one wife?????
A canonized plethora of saints who went through this same system.
Priest
Man ecumenical and otherwise.

The following links are paid links to an associate account to help me offset the cost of the websites until I come into my inheritance.

The accurate ten commandments, not the Satanic ten.

The movie is intended for mature audiences

Sadly it’s coming to America (we are hoping you love your unsaved family members).

Permanent link to this article: https://thedivineplan.org/never-forget-nanjing-nanking-the-watchman-sees-it-coming-again/