On the Wings of Eagles.

Today we are blessed to have digital clocks a fantastic advancement in the way we keep time compared to a hundred years ago.  Man has always been fascinated with time, but with all things temporal such as one’s life,  time runs out.

God can make more gold and meet needs when HE gets here?!? What do we do until then? PARTY! Help those in need and do it with the name of Jesus warn them why it is happening and how they can avoid the judgment.  Win the world with our joy and our love we want them to be part of the family.

The money does not belong to Rome it belongs to all of us. Stolen mostly from Protestants and from the governments their money financed wars with. defending them is enabling them and by doing so we have no repentance or any celebration.

How do we know that God is against them? It all goes back to Peter and his call to win the Jews to Christ.  Is there anything that God warned HIS people that Jesus King of Jews came for that Rome causes them to stumble?

The angels rejoice at one sinner saved how about millions of sinners saved? What kind of momentum can we build? Just HONOR God’s word and let what we know is to happen,  happen.  It is a time of celebration and trusting in God. Just because I do not do the will of a Pentacostal man who sits under the Pope as his defender does not make me bad, since giving him the crop circles he has been an antagonist towards me from the beginning. The reason why he has had no outpouring is he sees no value in the crop images, no value in what was found in Egypt and no value in me.

I think God would beg to differ on that,  so why me?  He had a great childhood and a bad ending I had a nightmarish childhood with what I hope will be a good ending and I forgave my stepmother and plead for her soul. A Pastor has a good child then he begins siding with God’s enemy to make us all believe there is something more important than the word a defender of Rome who knows God and what God wants.

I first appear to him there are moments of holding back tears and unable to figure it out confused as to why a transportation engineer with the last name that means the beautiful place was chosen for the task  we went from unable to understand to think he understands it all,  every time I talked and revealed something he made a joke shrugged it away just like the crop images that open up God’s

As to the day and hour? We know 666 has to be revealed first.  It is his mercy before justice upon the wicked and rebellious getting the god they chose for themselves.

A seven-segment led gives us numbers 0 through 9, and it takes three seven-segment LEDs to provide us with hours and minutes. 888 is God’s perfect completion adding to 24, which is the same numbers of elders we find around the throne. 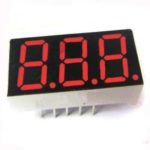 The symbol of the house of God incorporates all three. 777 in the pyramid shape each point pointing to the eighth scroll the 24 surrounding the HOLY one of Israel the King of the Jews. 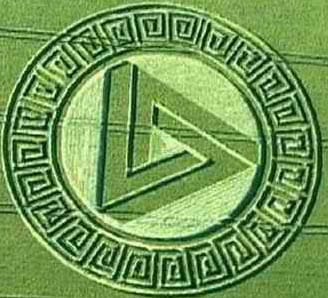 The featured image is a picture of the first watch I ever bought for myself in 77 the year I graduated with my graduation money my stepfather the carpenter gave me.  I really loved that man and I do miss him he was my rock until I found the rock of ages in 1982,  I led him to the LORD at the age of 67 and he went home at the age of 85 but not before he seen God revealing the meaning of the Crop Circles in my life.

He and my stepmother were both raised Catholic but did not know you could have a one on one personal relationship with the Lord Jesus Christ something was blocking their way a priesthood that stood between them and God as their intermediator. God is a jealous God and wants a direct relationship with you even above the spouse you are married to.

The clergy is called on for spiritual strength preachers are called to preach and spread the word teachers to teach eventually one must learn to walk it on their own and keep a support system in place be part of the community. Inevitably you are the priest and your praise the sacrifice.

Where will you spend your eternity?  God made the spirit and soul to last forever. It was HE who breathed on the first man to jump-start his life after forming him from the dust.  The breath of God fills our lungs when we come into the world as he completes the knitting process of our heart, lungs, and eyes with his DNA sequencers and his cell division within the womb, it was his design the ship that carried us here, some of us are from where HE came from,  the spirit to the physical and back again.

We need to learn what pleases and displeases God, receiving Jesus pleases God all the time.

We are on a journey through time one that makes a complete 360-degree circle what Father lost in the rebellion HE recovers in the end and adds even more to the grand place we call heaven because of the beautiful gift HE gave us HIS only-begotten Son.

I realize that same-sex individuals claim feelings for one another they say it is the love.  We have been told in scripture that it goes against the natural order of things and brings confusion to the little ones. The angels are taking the children and grandchildren to encourage repentance they must.   When the church is gone are you both going to take the mark and reject Christ? Because if you get left behind it means you did not love God or love the person you are with by HIS standards and mine by relationship to HIM.

I came to win souls not lose them.

You cant shoot this messenger no weapon formed against me shall prosper until peace is made in the middle east and that will be marriages between men and women.

If you don’t love their eternal soul and choose to do the right thing. Without a body, you crave what you conditioned your soul to crave an eternal withdrawal no it’s even worse. Jesus was not telling us about a place of weeping and gnashing of teeth without reason it is real and it is ugly.

Jesus told us there would be no marrying or giving in marriage in heaven for we will be like the angels and they do not desire what they never had. In Sodom, they were threatened by the men of that day and they will not allow those who cannot restrain themselves into heaven. We are not made into automatons once we get to heaven you decide whose will you wish to follow and to have and you do it here.

I saw a license plate the other day that read “ITSMYLF”  and though it is true it’s your life it was given to you by God in hopes that you would seek to know HIM and those who have it in their heart to desire to know HIM HE will make himself known to them.  No one may come to God unless the spirit of God draws him, he does not draw you to fall on your back but to your knees with hands raised high in the worship of how treasured you are by HIM in understanding the gift HE gave you your LIFE and it can continue on into eternity as a good life if the choices one makes are the choices he would desire a

You will have to decide to deeply love the soul of the person you are with and be roomies without roaming hands or give up heaven entirely for eternity with the real haters of men. This is God’s final warning when the man HE has chosen stands up.

The enemy tries to mock the creator’s hand and the values of creation by turning them into games of chance at casinos which God seriously frowns on. God would like us all to be winners, and to do that we must have faith in HIM and believe in HIM.

Don’t throw your money away, invest it into the kingdom of God for better returns in eternity.

Permanent link to this article: https://thedivineplan.org/telling-time/