Human Psychology is no Match for the Truth

Grigori Rasputin whose hand of judgement? Part one the setup.

The Next Genocide Please Avoid

We saw it in WWI and in WWII people hauled off in trains headed to their final end Germany was involved in both and both times they were on the wrong side of it Jewish people and Christian Protestants were the victims of a system that had no fear of God. 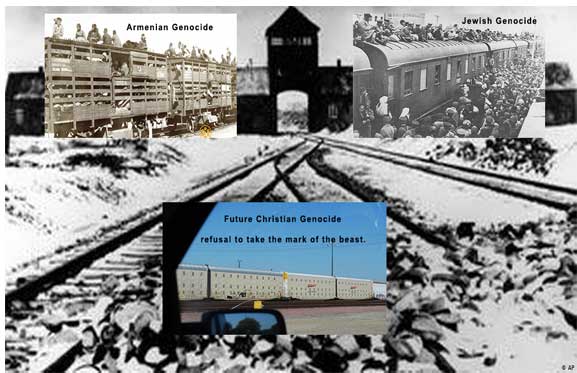 Jesus is on his way back and there are tools to help open the eyes of the blind and set the captives free so they do not have to worry about the train. The next great Genocide will be against newly converted Christians when they see the Church was telling the truth and the saints of God who had the HOLY SPIRIT and honored God’s word are taken by the Angels into the chambers of God as I have been revealing,  they are here, hoping that the wise could understand harvest= crops,  crop circles.

Those left behind will be forwarned about taking the mark by the same man who may or may not be putting it on them,  he hates me so much he does not want me,  I must locate  him another one who does not see the value in Christ who refuses to open the word to the world or honor the will of God, he sees the crop circles as gobbly gook that serve no purpose to expand the church. He prefers to prepare old meals rather than use the new food sent by the Master to begin the celebration. He is deluded by the harlot who made the gifts more important than the word they originated through her.

If it wasn’t for her we would not be having people falling over backward and pretending they know God.

Isaiah 26:19-21
(19)  Thy dead men shall live, together with my dead body shall they arise. Awake and sing, ye that dwell in dust: for thy dew is as the dew of herbs, and the earth shall cast out the dead.
(20)  Come, my people, enter thou into thy chambers, and shut thy doors about thee: hide thyself as it were for a little moment, until the indignation be overpast.
(21)  For, behold, the LORD cometh out of his place to punish the inhabitants of the earth for their iniquity: the earth also shall disclose her blood, and shall no more cover her slain.

Q. Who is the whore and harlot of Revelation 18? Think quick because time is running out.

Hint:  It is not a country or nation it is a religious system that has no faithfulness to the law or the teachings of Christ she claims to be a bride but sits as a queen before the wedding and has been creating many demonic doctrines. She sits over many waters (people) and the Church needs to rise up above her head to crush it setting her captives free.

The following map was taken from the harlot’s website I placed up the see something say something image over it. She cannot any longer deny who she is but her champions behind the pulpit still try.

Historically Catholic’s have killed more people than any other religion on the face of the earth and all the others are her offspring.

Permanent link to this article: https://thedivineplan.org/the-next-great-genocide/