Human Psychology is no Match for the Truth

The Problem with Priests

Proverbs 14:12  There is a way which seemeth right unto a man, but the end thereof are the ways of death.

Before the time of Moses, the false gods had themselves, priests, men who profited off the fears of the people and made them serve their false gods. The reality was the people were made into their servants to serve them and not the true God of creation. Did the men who would serve these false gods create them, or was it a demon who created them?

I believe they took the roles men gave them.

Only men can give the devils power, and it is only men under the authority of Christ who can take it away.

God cursed the earth after the fall of man for the sake of saving man who disobeyed the command of the Lord by listening to one who was once closest to HIM who wanted to show himself superior. However, we learn that in Jeremiah 4:27-28  the earth had on it a curse already. Man was placed here to break that curse. To restore in the eyes of the Angel’s the value of the Son of God who had been devalued when the covering meant to protect the kingdom turned on the SON and denied HE was needed at all.

Mocking God that if the Son ever showed up, he would make him his pet.

Denying the SON would be the equivalent of the Catholic Church replacing Jesus with a Muslim Messiah in America’s White House to try and accomplish some wicked plan of peace and who suffered for it?  Gulf of Mexico oil spill ring any bells? Two years earlier at a debate with Obama in front of at least 200 million Christians, John McCain claimed we were sending 700 billion dollars to fund terrorism against us, and we needed to start digging for oil and we need to do it now. Oddly  33 days later we have a request for that same amount in bailout money as the housing market starts collapsing  John starts playing up the old man routine on Saturday night live and loses the vote on purpose to allow the priesthood to put in their peace plan and their king. John owned seven houses at the time he must have been expecting the seven spirits of God before anyone else.

America is now controlled by the Catholic Church that is not my God being in control the Catholic Cookie Christ is not my Christ; the enemy made the SON of God his pet using the priesthood. 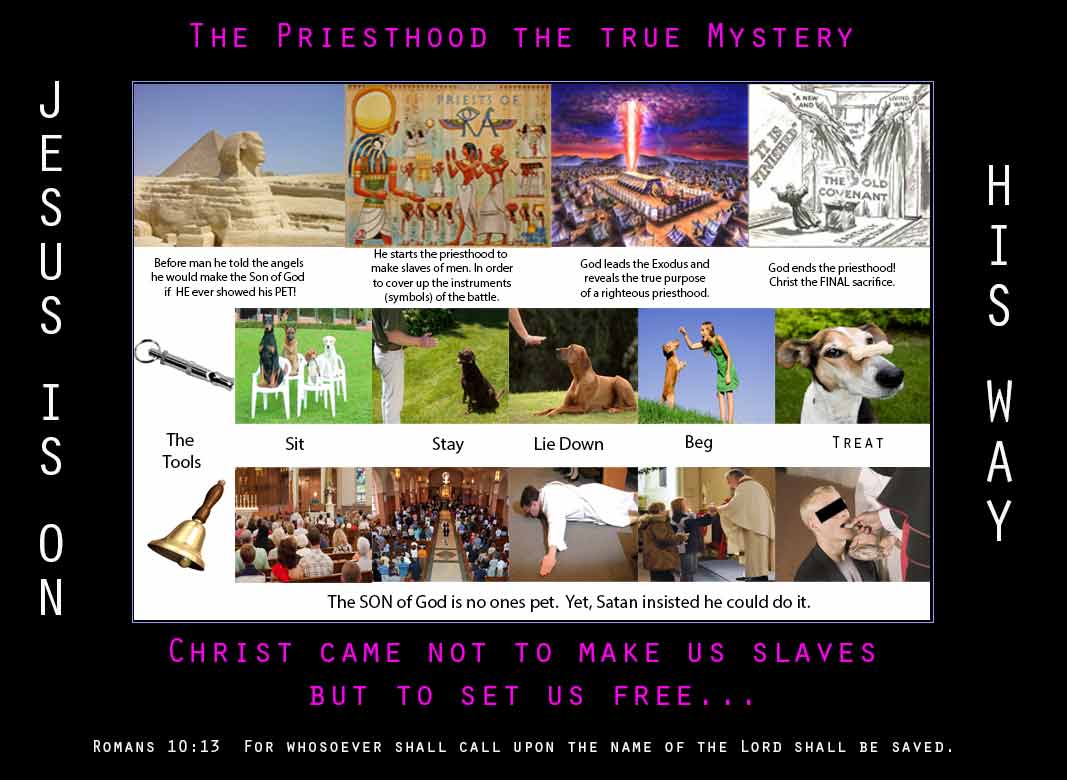 Using the name of Christ to build Satan’s one world order took the priesthood to blind the eyes of the lost from being filled with the HOLY SPIRIT. Religion became the substitute, and works replaced grace. Jesus makes no one work for what HE offers freely.

George H.W. Bush tried to take land from Israel in an attempt at peace, and we had hurricane Katrina follow that attempt.  They could not wait to hate God and get their little Mardis Gras going again.  No repentance and I don’t expect it from the harlots Pentecostals either.

The curse on man, it was to toil/labor pulling up the weeds that would come forth as a result of the curse. Clever men found a way around this by self-exaltation in service to a false god they supported a King who would also believe in this false god and protect them. In our culture today, we could call them minions and not every King was a good king and every false god a slave maker. Every time God’s chosen people hung around them, they were placed in bondage, and God let them suffer as a lesson for their disobedience to HIM.

God had Moses deliver HIS people out of bondage, to go into the wilderness to worship HIM.  God wanted all of the Hebrews to be priests to HIM only one tribe of the twelve took the role it was the tribe of Levi given the constellation called Libra represented by the scales of justice.  The law was given and the breaking of the law required an atonement. The priests were to offer up sacrifices on behalf of the people. As God looked down on the sacrifice, he was always thinking of HIS SON along with the sacrifice HE would make for all people.

God’s priesthood, unlike Satan’s and his many false gods with their minion priesthoods, was deliberately created to have an ending once the final sacrifice came.

You are looking at the back of the cross at the final sacrifice.

God did not reveal this in order to expose the works of Satan at the end to crush the head of the serpent to set his captives free from the deception of the priesthood of today. It is designed by God to be ended. God who knew that the devils’ anger would destroy and scatter the Jewish people in 70 AD HE technically made the devil his pet in destroying the temple. In 90 AD, John tells us he is going to need it again just before Jesus arrives.

Christ had come, and it was no longer needed. What God desired from Hebrews in being all priests to HIM occurs through Christ when we inspect the sacrifice and receive it with joy.  We become part of the Holy Priesthood a royal nation,  a royal people.  No one is holding a position less than the highest except for the false priests mock sacrificing on altars devised by wicked men to again enslave people by controlling them with the fear of excommunication.

The passage is from the SIXTH book of the New Testament that bears their name.

Romans 8:33-35
(33)  Who shall lay any thing to the charge of God’s elect? It is God that justifieth.
(34)  Who is he that condemneth? It is Christ that died, yea rather, that is risen again, who is even at the right hand of God, who also maketh intercession for us.
(35)  Who shall separate us from the love of Christ? Shall tribulation, or distress, or persecution, or famine, or nakedness, or peril, or sword?

Or a phony priesthood with doctrines of devils as their guides.

The enemy,  wants us to think the work is not finished and Christ has not come by bringing back the priesthood in 313 to build his new world order. Their hiding of the word from the world brought about the nation of Islam.

Abraham’s descendant’s learned quickly that idolatry was bondage and something Rome and Christians who back Rome never learned,  are they going to make rapture ?? If you were a HOLY GOD who values your SON and desires us to hang on HIS every word would you take them?   Angel’s are leaving behind all things that offend and do iniquity, and I will not do the will of a minister who protects the harlot who destroyed America with her priesthood.

Just let me do the work father sent me to do and quit shaking the tightrope it’s your family co-workers and friends I’m trying to get across who because of the harlot and her Pentecostals who are peppered with Jesuit Priests and their many voices spinning the word to suit them while condemning souls  who haven’t heard the word because of them.

Permanent link to this article: https://thedivineplan.org/the-problem-with-priests/